Flick through your Instagram feed any day of the week and you’ll likely be presented with several images of topless guys. More often than not, those same guys have bodies that look like were chiselled by Gods themselves. But what you may also notice, is that they’re not the same steroid-induced muscular mountains – the likes of which were made popular by Arnold Schwarzenegger – but much leaner versions instead, with virtually no body fat to be seen.

The preference for a leaner build has been around for a few decades now, but it’s certainly a far cry from the bodies guy were ‘supposed’ to sport in years gone by. In the late 1800s for example, the ‘in thing’ was to be fat, as it showed you had enough wealth to afford feasts of food. There were even Fat Men’s Clubs in America, that set its minimum weight at 200 pounds/90kgs in order for you to gain entry. Nowadays, 90kgs is considered average, with many workout warriors aiming to break the 100kg barrier.

Go back even further in time to the Ancient Greeks, and a God-like, muscular body brought you God-like status amongst your peers.

With photo-sharing platforms such as Instagram becoming ever-popular by the day, keeping up with the latest trends when it comes to how we should look under clothes, is almost as tiresome as choosing the clothes themselves. Especially as we now seem to have come full circle, with (most) guys still wanted to look ripped, but not necessarily aiming for the extreme body fat deficits of a bodybuilder that they used to in 2010.

We spoke to Andy Anderson, change expert and founder of the Ultimate You Change Centres, to find out if he’s noticed a change in body trends, what causes them, and what future male body types may look like.

Dr. Harrison Pope, Professor of Psychiatry at Harvard University has written a book, The Adonis Complex, which examines the ways in which the media manipulates and distorts that very notion of the ideal body type, particularly for men. We’re used to the idea of women having to follow magazine ideals, but guys don’t have it easy, either.We spoke to Andy Anderson, change expert and founder of the Ultimate You Change Centres, to find out if he’s noticed a change in body trends, what causes them, and what future male body types may look like.

Andy starts by telling us that the “surfer beach bod” look was made popular in the late ’90s and early 2000s, “lean, healthy and tanned”. But not everyone wanted to be a part of that clique, bodybuilders still had shrines to Schwarzenegger and Stallone, “[they] were getting bigger and it was becoming extreme”, Andy adds.

“Over the last five years or so, it’s become more of a social norm that men work out, have more lean muscle mass and are focused on being strong.”

“They’re going for the Wolverine look – lean with hard, toned muscle. Instagram has fuelled that ideal.”

Just as Instagram has been a go-to bible for women to see how they should be looking, it’s played a similar role for men. We can be fit and strong, sure, but if we want to get likes on our photos, we need to be built as well.

To this, Andy says, “I think social media is definitely having an influence on society in terms of marketing an ‘ideal’ body shape. It used to come from magazines – now we get it from social media.”

“There are definitely more men who want that lean, toned, harder look. But I think what’s missing is the understanding of what it takes to achieve it!”

As Andy points out, we didn’t always have Instagram to influence our decisions. We used to turn to magazines and the big-screen to determine how we should be looking and dressing. TheList.com says in the 1950s and 60s the “executive look” was in fashion. Men wanted to appear big, but without the necessity for muscle, so they would wear boxy blazers with a looser fit compared to the slim and skinny styles of today.

Bodies did slim down somewhat in the late 60s and 70s with the arrival of Sean Connery as the first James Bond. He introduced an ever-so-slightly more toned figure, although still no abs to be seen. However, his suits were cut closer to the body and his chest was hairy. To many, he is the epitome of a ‘manly man’.

Of course, not everybody sticks to the “ideal”, some like to stray from the path. Take Leonardo DiCaprio for example, the 45-year-old actor championed the ‘dad bod’ look back in 2016. And – for many men – this was taken as an opportunity to let themselves go. 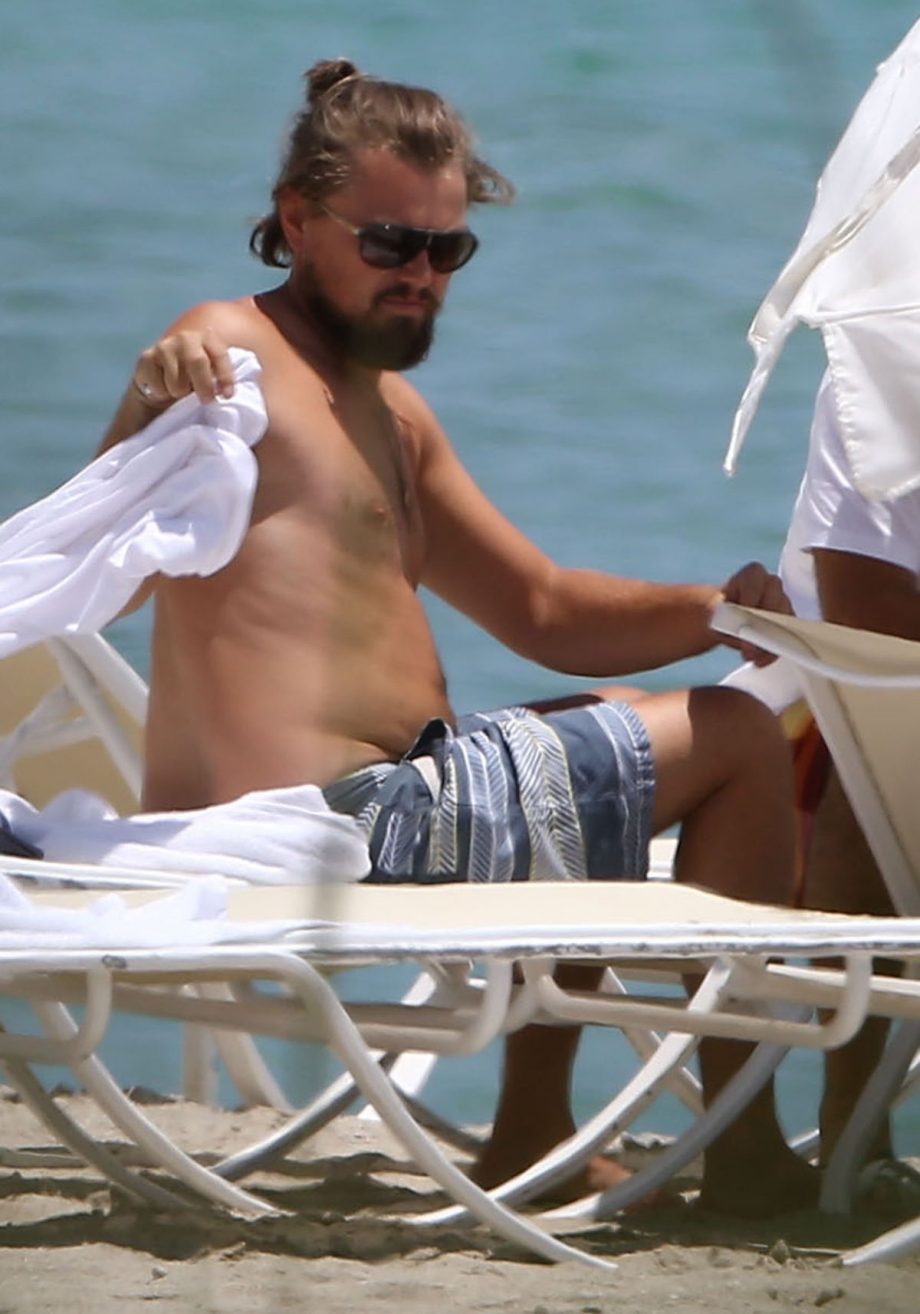 As far as we’re concerned, you should be able to do what the heck you want with your body, and leave the shrill “dad bod mania” headlines for those stuck in 2016. But is loosening your standard to the point of a dad bod healthy? We asked an expert to find out.

According to Andy, it can be ok, but it has its conditions. “What we accept is very personal, but the way we should all be judging our bodies and lives is how we feel day-to-day.”

“We should ask ourselves: ‘Do I feel good? Is my energy increasing? Am I sustaining my momentum during the day? Do I feel happier? Do I have more clarity? Do I feel more motivated? And not just: ‘What do I look like?'”

“In all honesty, being lean, healthy and having a smaller waistline is just a reflection of eating clean and moving properly. So, you’ll naturally lose the ‘dad bod’ if you’re focused on clean eating and movement, but your first preoccupation should be how you feel.”

This is a sentiment reiterated by research conducted by American gym chain Planet Fitness in 2019, which found that 79 percent (of the 2,217 mixed-sex study group) were happy with their figure, while 46 percent revealed a ‘dad bod’ made them feel relaxed. Furthermore, 78 percent said a ‘dad bod’ represented a man who was comfortable in his own skin.

As for ‘the next big thing’ in male body trends, Andy says, “it’s an evolution and I think we’ll move towards taking a more holistic view of things. We’ll move away from the superficial. People will learn about who they need to be in order to live true to their authentic self. That’s the next positive evolution I hope will happen.”

As for the last ten years of Instagram, here’s our take on what has ebbed in and out of stye.

The time period between 2010-2012 was dominated by Cory Monteith, James Franco and Ryan Reynolds types, as society got over its Green Day emo punk hangover.

According to Glamour Magazine, the hottest guys of this time period marked a return to the classics: George Clooney, Mathew McConaughey, Ashton Kutcher, Daniel Craig, Jon Hamm and Brad Pitt.

These years saw a divergence in men’s physique. Some revered Leonardo DiCaprio’s dad bod (see: Emilia Clarke Says Her Ideal Man Has A Dad Bod), but most went more in the ‘get as jacked as possible direction’ at the behest of growing icons like Joe Rogan and Ross Edgley.

Particularly in Australia, the most popular men’s body of the decade crystallised as a mix between the jacked bros of 2017, and the chubby wholesome rig of 2016. In other words: strong but not too ripped, not too huge, and not too skinny.

How To Build The Perfect Male Body?

How To Get A Slim Thick Body?

Is It Possible To Eat Too Much Fruit?

How To Stop Eating Too Much?

How To Regrow Hair?

What Are Omega-3’s & Why Do Our Bodies Need Them?

How To Regrow Hair?

In Consumely.com you can learn about the best ways to stay healthy; Diet plans for men and women; Fitness tips and Everything you need for fitness; weight loss diets, Plans and ...